Administrative Leadership in Social Security, 1935-54
Jerry R. Cates
The story of the conflict of values and of the short-sighted compromise that resulted in the Social Security system as we know it today

The establishment of the Social Security Board in 1935 confronted administrators and policy makers with basic value decisions. Should the system serve to raise the incomes of America's neediest citizens? Or did that aim smack too much of the ideology of redistribution of wealth? Would it rob workers of incentives to provide for their own futures and reward idleness?

The conflict of values was played out on a political stage marked by infighting, deception, and short-sighted compromise. The result is the social security system we know today—one that benefits those who need it least, and one that is in a perpetual state of financial difficulty.

Insuring Inequality is a penetrating analysis and indictment of that bureaucracy which felt the welfare of America's aged was an acceptable price to pay for the preservation of an ideologically correct social insurance system—a system that would not seriously challenge income inequality in America. Previously unresearched documents not only reveal that social insurance discriminates against the poor and this was a foreseen, intended consequence; but they also reveal that the leaders predicted a financially troubled system and did little to prevent it. 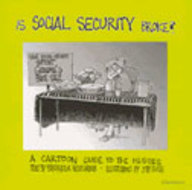 Add to Cart
nothing