Chadwick Boseman is the author of Hieroglyphic Graffiti, produced at Negro Playwright's Theatre, Kuntu Repertory, the National Black Theatre Festival and the Hip Hop Theatre Festival. He is the co-writer of Rhyme Deferred, which toured throughout the United States and appears in the Hip Hop Theatre Anthology The Fire This Time. He is the author of Deep Azure, commissioned and produced by Congo Square Theatre Company, work-shopped at the Folger Shakespeare Library and the Apollo Theatre. Deep Azure earned Chad a 2006 Jeff Award Nomination for Best New Play.

Chadwick is also a Drama League Directing Fellow. His directing credits include: Dutchman, Wine in the Wilderness, Indian Summer, Spear in the Sun, Colored Museum, Six Hits, Hieroglyphic Graffiti, and Blood Over a Broken Pawn, a short film, a winner in the short film form at the Hollywood Black Film Festival.

Some of his acting stage credits include Breathe, Learning Curve, Romeo and Juliet, Macbeth, ABK 4Life, Willie's Cut and Shine, Rhyme Deferred, Bootleg Blues, and Zooman and the Sign. He won an AUDELCO Award for Best Supporting Actor in a Drama for his role in the late Ron Milner's Urban Transitions.

Chadwick plays the lead in Mischa Webley's soon to be released psychological war film Kill Hole. He also played legendary running back Floyd Little in the Universal Pictures movie, The Express. He is probably most known for his roles in ABC Family's series Lincoln Heights and NBC's Persons Unknown. He has also guest starred on Justified, Detroit 187, Castle, Lie to Me, The Glades, ER, Cold Case, Law & Order, Third Watch, CSI New York.

Chadwick is a graduate of Howard University. He also trained at the British American Dramatic Academy at Oxford. He thanks God and his ancestors for his creative experiences.

Deep Azure was an experiment to push the boundaries of the genre of Hip Hop theater, which was itself pushing the boundaries of theater. My first work in the Hip Hop genre, Rhyme Deferred, of which I was a co-writer and performer, fit into the Hip Hop aesthetic because it used the five elements of Hip Hop to tell the story. My second work in the genre, Hieroglyphic Graffiti, a modern retelling of the Ausar-Auset myth, was based in the poetry and culture of Hip Hop but was not written as a musical text. Deep Azure is, in some ways, a fusion and progression of my previous plays, as well as a fusion of cultural expressions spanning distances and time periods.

As the play's angelic chorus, Street Knowledge, poses in the opening prologue, "Let's sling a slang for all sights and seasons in our song," Deep Azure uses what jazz artists call signifying and Hip Hop artists call "sampling" to fuse the slang of varied Hip Hop epicenters with jazz slang, jingles, show tunes, slogans, and ancient scripture into a text that has been compared to Elizabethan verse. It was my belief that the musical versions of Hip Hop theater were proficient at evoking emotional depth in dance and music, but I wanted to see if the poetically centered Hip Hop text could rival the emotional depth of classic poetic texts.

Unlike modern remakes of Shakespeare, Aeschylus, and Sophocles, Deep Azure tells a new story with modern issues that also illuminates the classic themes of love, betrayal, revenge, and destiny that pervade the elder tragedies. Deep Azure, the story of an anorexic-bulimic African American woman whose fiancé is killed by a black police officer, points to a woman's struggles of body image and beauty, issues that are often ignored by the misogynistic brand of Hip Hop, and also illuminates the topical issues of racial profiling and police brutality. The parallel comparisons of the skewed vision of the black cop towards his own people and Azure's distorted perceptions of her ugliness provide a discourse on self-hate and the self abuse that follows.

The tragedy of Deep's death that incites the play's action and the subsequent struggles of the vengeful Roshad, a guilt-ridden Tone, and an anorexic Azure to digest the loss of their friend requires a higher means of articulation and expression: "This Prince left us dense and went home to God too soon." Deep is not just another black man lost to the hand of violence in America's unkind streets. He is a Prince—a would-be king, a would-be husband, a would-be father, and a would-be leader—whose development has been aborted before he could serve out his true purpose. Thus, the actions and outcomes of the characters take on the similar mythic and cosmic proportions that permeate the work of classic tragedy. Therefore, the Hip Hop aesthetic is used to establish a world unique to Deep Azure, one in which the descended expressions of the African Diaspora—Hip Hop, jazz, blues—which are all affected by the Euro-American experience, are instrumental in establishing the cosmic rules of Deep Azure's ritual passion.

In addition, the storytelling tools of popping and locking and beat-boxing utilized by Street Knowledge, the high priests of the piece, convey their otherworldliness in a way that is organic to the world of the play. Although the aesthetic is not opposed to the smoke and mirrors, flying apparatus, and sinking stages that are the expensive spectacles commonly utilized to convey the supernatural in theater (Hip Hop certainly has its own technologies that can be used in the performance), heightened Hip Hop expressions allow for the magical realism necessary to depict divine characters like Street Knowledge without such pricey bells and whistles. This too, speaks to the traditional economic and artistic potency of the Hip Hop aesthetic, which has the godly capability of making something from nothing. Just as Doug E. Fresh's beat-box was born out of a desire to play the trumpet, demonstrating his perseverance in making music without access to a music program that would support that dream, even so, the Hip Hop aesthetic in Deep Azure empowers the performer with an expression that is equally death defying to the audience because it attempts flight with no strings attached. This inherent quality in the work, which urges the audience to come to an understanding of the play's language, makes the performer-audience relationship a more intimate one because it asks not that the audience suspend its belief in an illusion, but that it participates in the collective belief of the ritual. 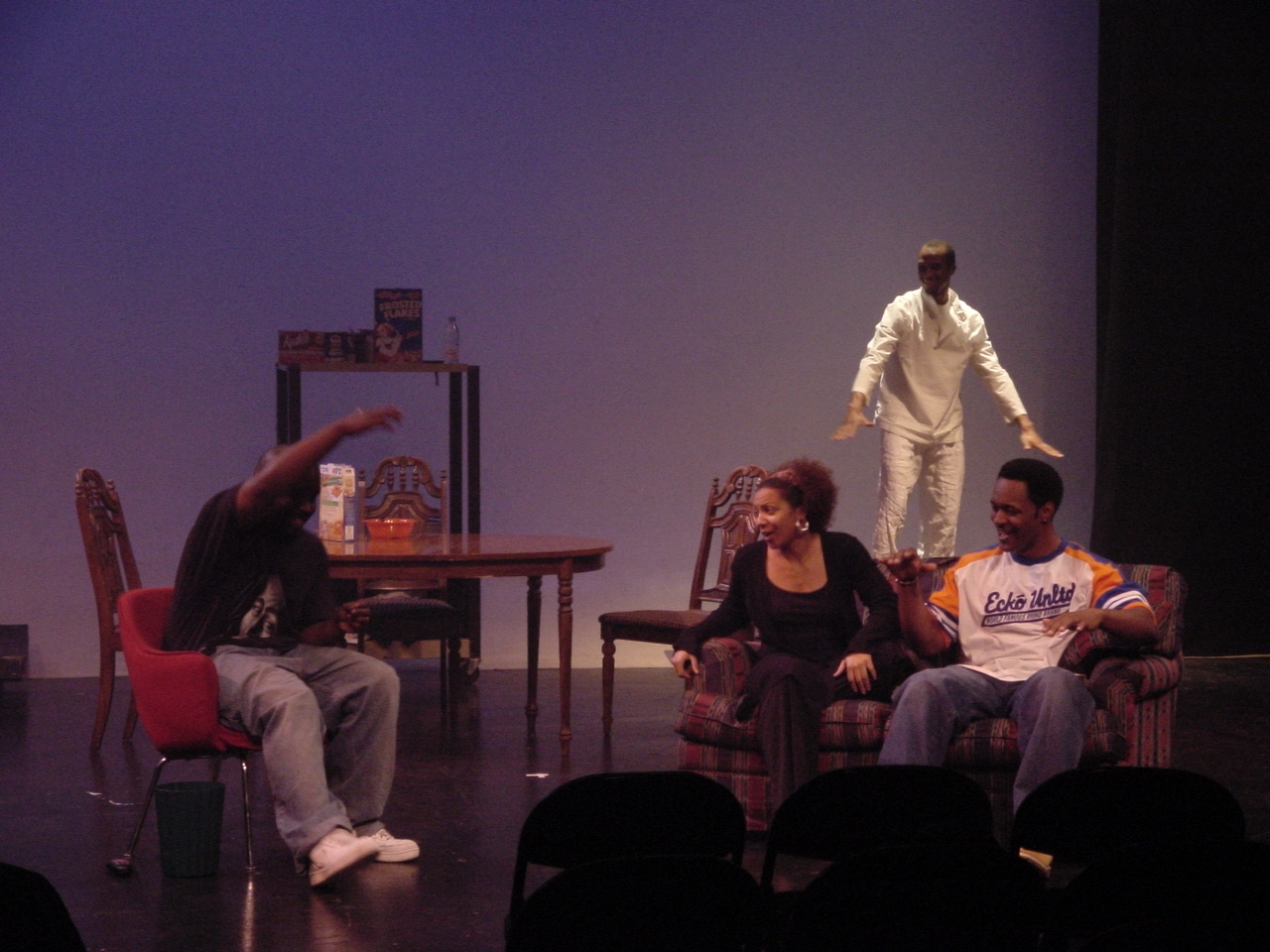 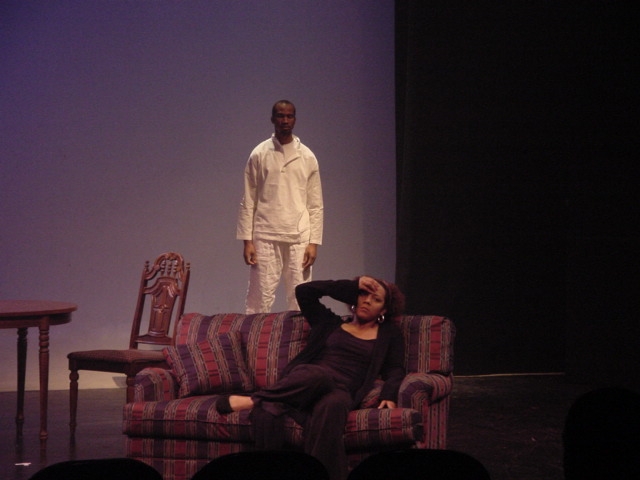 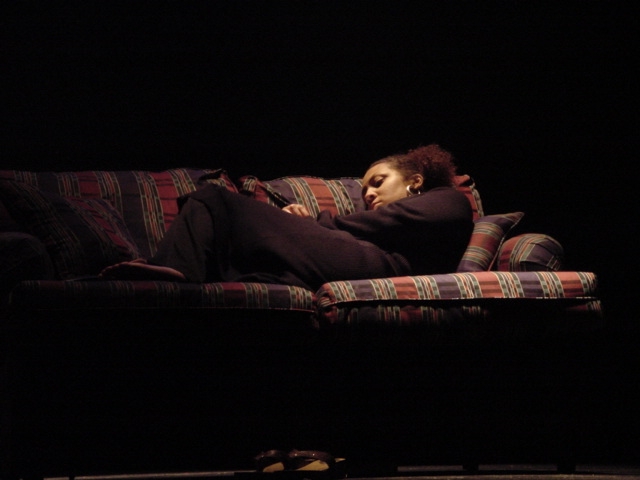 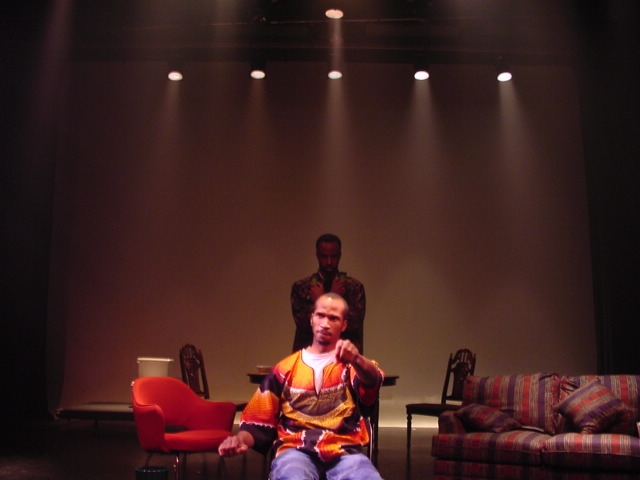 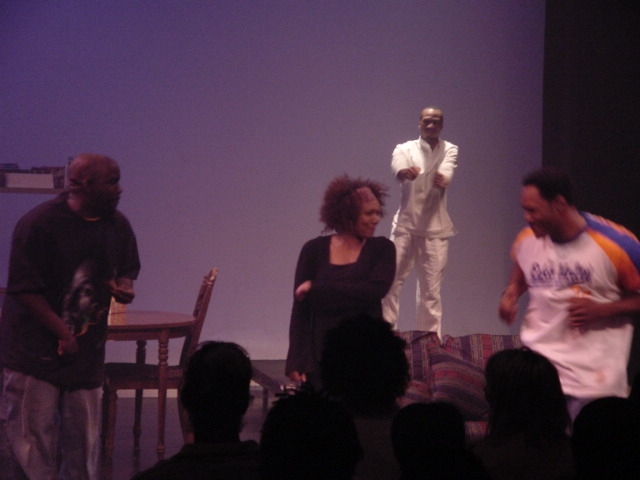 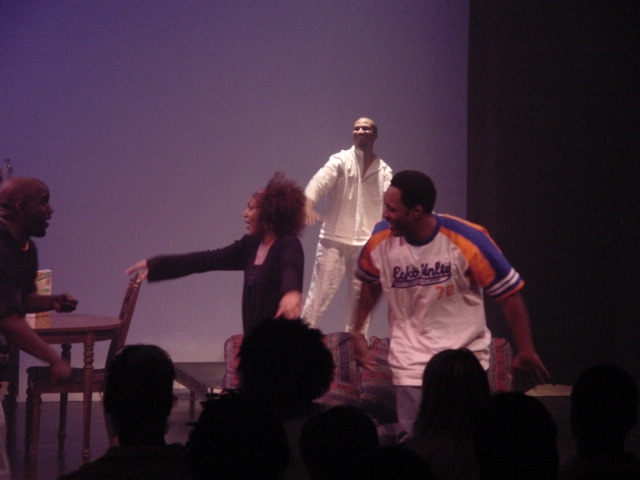